Updated by
Riley Tomasek
on March 30, 2021
A showcase of some of the best UX Designer resume samples and examples on Standard Resume. Use these diverse, real-world resume examples for inspiration and to help you write a great resume that highlights your experience and qualifications.
Use this template

Leading and managing a team of 9 designers, researchers, and writers to define the strategy and direction of Migration, Modernization, and management products for Google Cloud

Working directly with Apple to design mobile apps for iOS devices including iPhone, iPad, and Apple Watch for Retail, Telco, and Healthcare industries.

Led UX efforts for the redesign for the new Email Builder (launched on May 28, 2015) portion of the Salesfusion 360 app, used by over 90% of all customers. Led User Research and Testing efforts on this project and many others to make informed design decisions.

Working directly with Apple to design mobile apps for iOS devices including iPhone, iPad, and Apple Watch for Retail, Telco, and Healthcare industries.

Led UX efforts on the redesign of the internal employee portal, Socrates, designing both the end-user and authoring experience. 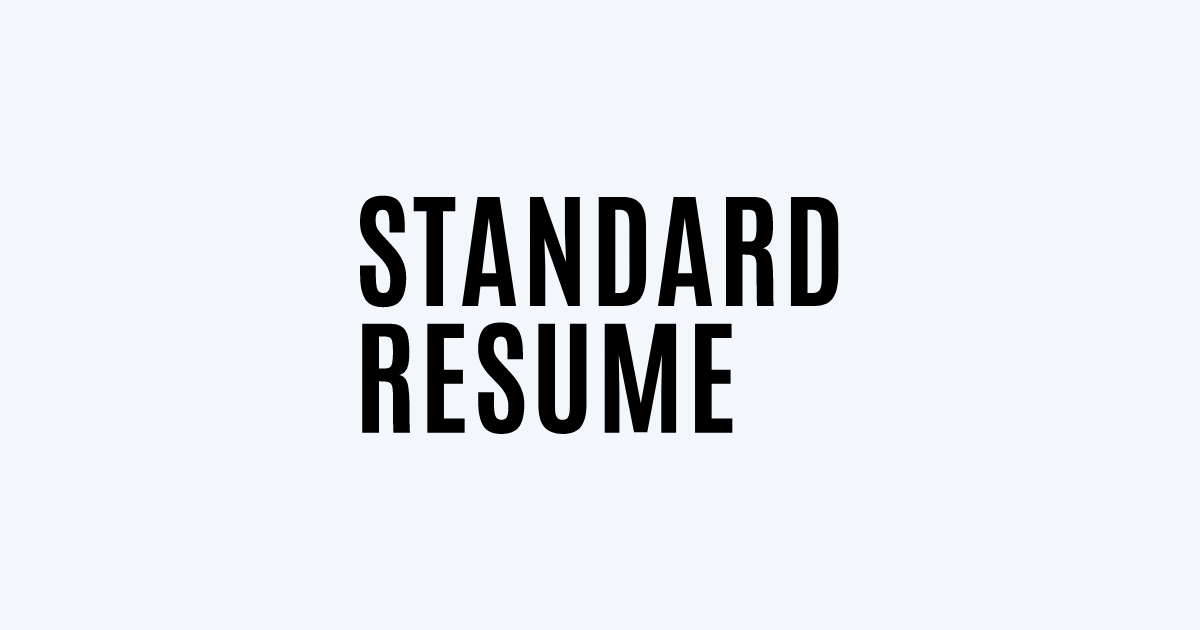 SparkAmplify is a data-driven global media outreach platform; it is also a 2017 Google Startup Grind Top50 company. I was responsible for the platform and website UIUX design.

understanding the platform entry obstacles for the media and companies.

Created the look, layout, and features of the Taiwan Biotech website, and responsible for the overall visual design, including VI, package, graphic, and retail display.

Coordinated with clients to determine the scope of a project, presented design concepts to them, and delivered the final design. 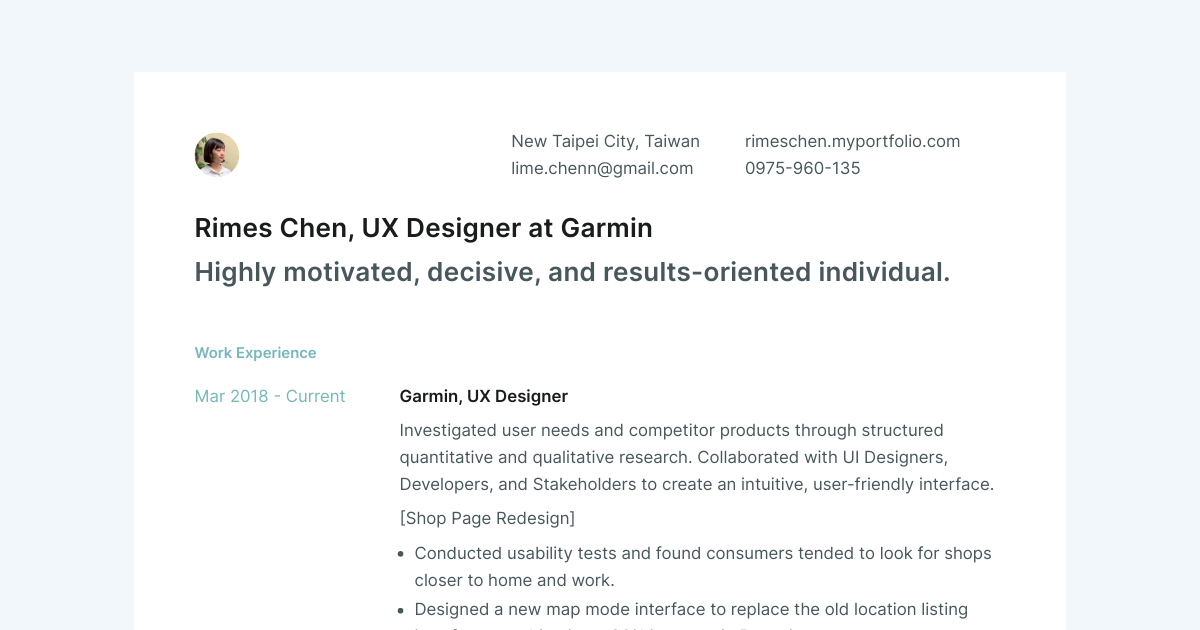 I’m a UX team of one at Cultural Care Au Pair in the marketing technology team (Martech). I’ve done everything from user research, detailed UI mockups, visual design, high fidelity prototyping, usability studies, and supporting the implementation process. I design with a global mindset as our product is seen and used in 26 different countries with markets in Latin America, Europe, Africa, and Asia.

As a UX Designer on the internal technology team, my users were fellow staff members and investment managers. It was a generalist role where I was responsible for designing applications to automate urgent daily tasks. A typical day would include gathering business requirements, rapidly prototyping, creating UI elements, and supporting the development process.

This was a 6-month full-time co-op. I learned the fundamentals of working in an agile development team. I gained skills in SASS, Git, and PHP which I used when designing and deploying themes on content management systems like Drupal and WordPress.

I worked closely with Harvard Business School Communications Specialists in the technology team to develop internal websites for the staff.

Raw Art Works (RAW) is a youth arts organization in Lynn, MA focused on art therapy with programs in visual arts, digital film, and more. As an alumna, I advocated for the voices who are not in the board room, the kids and teens who participate in the program. I also provided mentorship for high school seniors during the college application process. 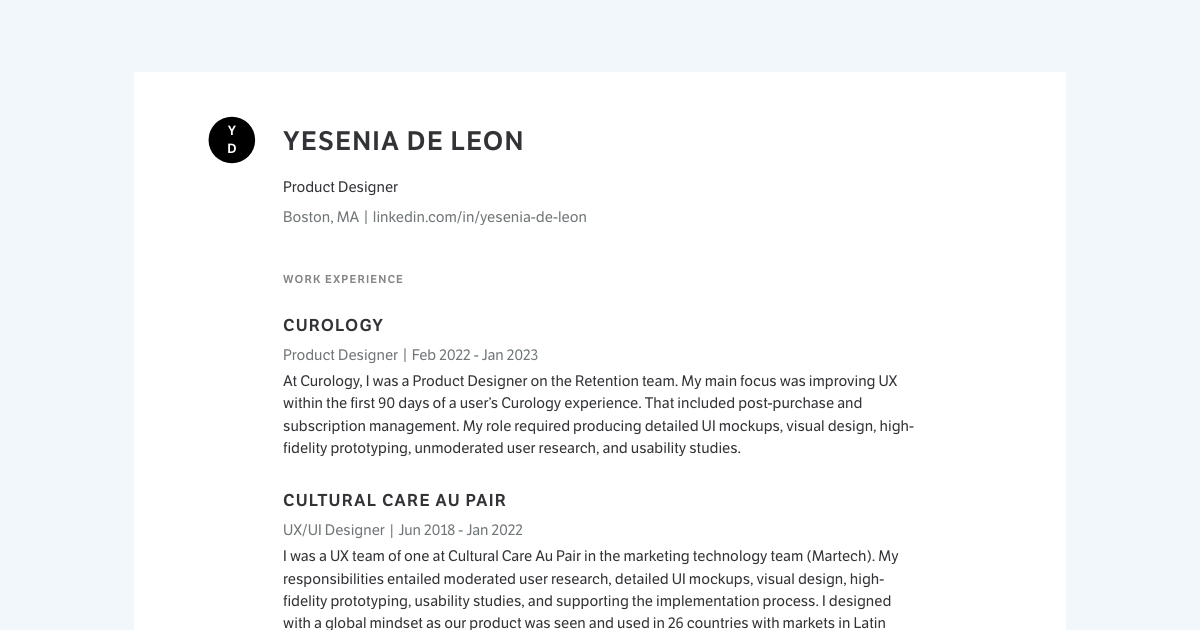 At UpTop I lead a team of user experience designers and developers who craft compelling and effective digital solutions for our agency customers and internal projects. My work encompasses all phases of product development, from the concept and strategy, through stakeholder buy-in, research, wireframes, design, development, launch and beyond.

Transitioned from a developer to designer by learning how to evaluate business goals, empathize with user needs and ideate solutions to create buildable designs that can be tested, evaluated and refined.

User Experience lead on a startup team working to design, build and launch a new streaming music product with an innovative social component.

Developed websites for a broad range of enterprise, small business and non-profit clients in a fast-paced agency environment.

Website coding and page design for the largest telecom in the Pacific Northwest, and their small business and enterprise clients.

Check out my portfolio site to learn more about my project work and experience. 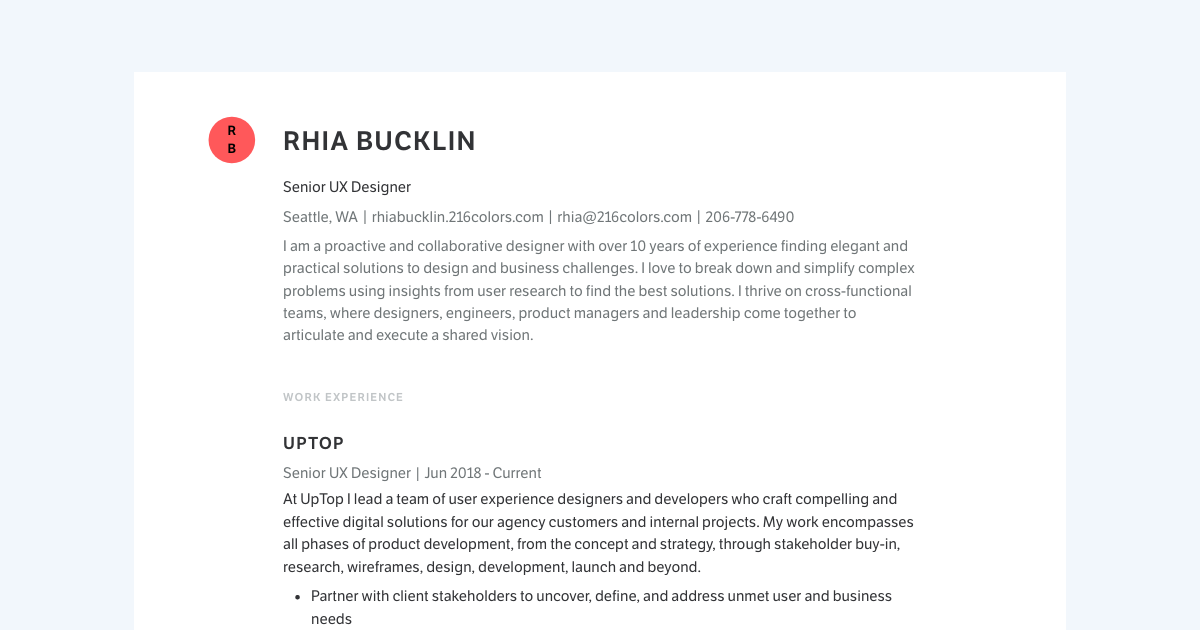 As a senior UX specialist, I joined the product team with the intention of both improving the user experience process and contributing to the development of new features.

My main responsibility has been to establish a continuous user research strategy, combining qualitative and quantitative methods to better understand our users and make better product decisions.

I drove the redesign of the API documentation site (docs.bankingcircleconnect.com) with a focus on good information architecture and easy navigation.

As a UX/UI designer at Oticon Medical, I worked in a multidisciplinary distributed team where I was responsible for leading the design of new features for our cochlear implant fitting software, Genie Medical CI.

I collaborated with different stakeholders from product managers, clinical support representatives, and system engineers to project managers and software developers to ensure that our user's needs are met and that we provide a delightful experience for the hearing care specialists that use our solutions. My main tasks in this role were:

As a Scrum Master in Oticon Medical, I was responsible for the Scrum practices of my multidisciplinary team. I facilitated the different meetings, plannings, and retrospectives. And helped my team to keep growing and to find better ways of improving our teamwork. I also acted as a communication link between project management and our team.

As a research assistant at DTU, I was assigned to support the research of a Ph.D. thesis.

Worked as a producer and visual designer in two documentary films that were locally acclaimed. I gained experience in the following areas:

During my master's education, I focused on the areas of User Experience and Product Design. I enjoyed the most courses like:

During my bachelor's, I was introduced to the concept of User-Centered Design and Design Thinking.

I participated in many design projects and got to practice with many different styles of design methodologies and prototype building.

I studied for one year abroad at Fachhochschule Salzburg, where I took Design and Product Management Courses.

A Man Called Bronco, was my introduction into the film medium, the documentary was independently produced by a three-person team, where the responsibilities were shared equally.

I was interested in web design and development, and I greatly enjoy reading books, so I decided to combine the two. The result is Olmenta, a web page where I recommended my favourite books while experimenting with different styles of UI. 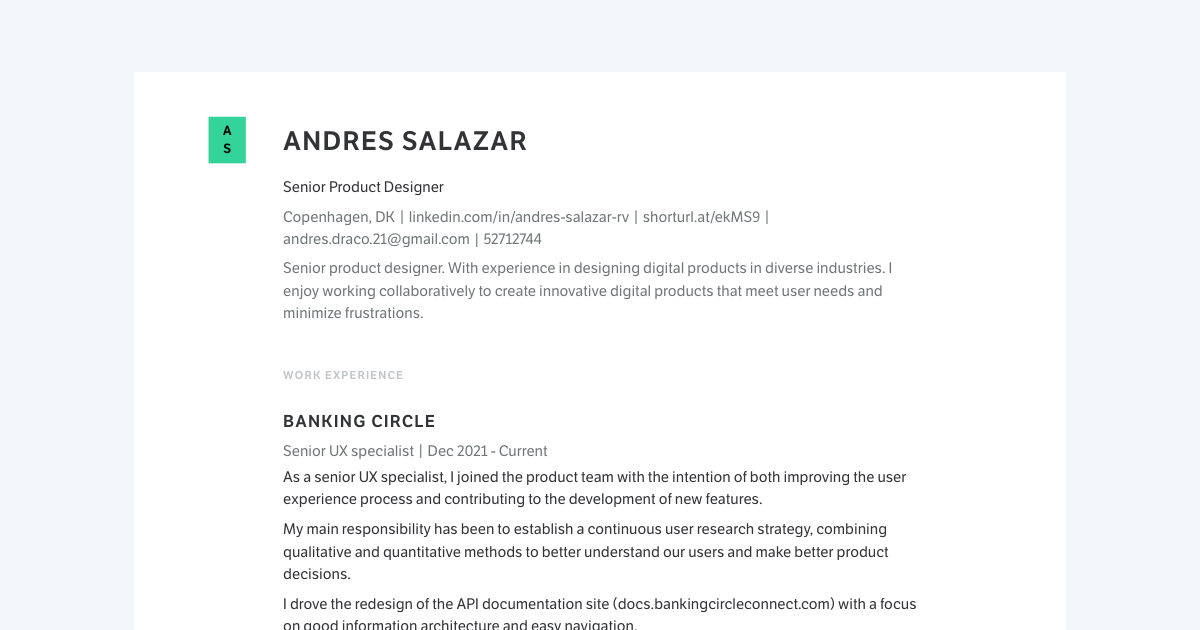 Worked on various digital products for clients across geographies in the field of travel, finance, technology, automobile and e-commerce. I collaborate with specialists from respective fields as and when required to deliver best results

Among one of the 80 designers, designing next generation devices and experiences for Samsung Electronics. Worked in constant sync with development, design and user testing team in Korea and India, keeping in mind the business opportunities for Samsung, end customers and the stakeholder.

The summer school entitled intensive courses mentioned above with various other options for cross learning such as Design for Interactive Spaces / Products, Machine Learning, AI, Physical Computing etc. The course not only taught a lot about futuristic design but also exposed us towards different cultures and working styles. It helped us convey our ideas with hands on projects within a week's time.

A one week design workshop from various backgrounds put together in a team with one of given fields (i.e. education, food and sanitation etc) to work on.

We designed a game for exposing the kids to various career opportunity, apart from the set notion in India of being a doctor or an engineer.

HungerBox is a full stack B2B, F&B technology company delivering food solutions for the corporates in India. They are revolutionising office food and cafeteria management along with the best caterers in the city with the use of best in class technology.

Fitkar is a workshop that delivers car tyres, other accessories and services at the doorstep. It provides convenience, safety, assurance and warranty to the customers with less wait time.

Trip2learn is a small startup travel company that enables language tourism. They create edu-cultural travel packages that ensure complete cultural immersion and tours that provide a real and out-of-the-ordinary experience

It has already recovered its investment cost and finally up for making profits.

Mozopartner is a partner app for a small startup company called Carmozo. It enables firms to register on the app and get listed as a service station. It helps vendors maintain their order records and update the customers to track the same

Huns is an 80 year old electronics store in Pune. I designed an in house e-commerce platform built on Shopify. Currently making progressive changes to drive traffic.

Tizen Z1 is a low cost phone designed for blue collar workers of India. It is designed to be an entertainment box with an all new OS experience, providing them with all the feature of a smartphone at a low price.

ChatOn app is Samsung's in- house chatting application. With other IM's like Whatsapp, Facebook & Hike ; Chaton needed an uplift to match up with these applications

Samsung Innovation team works for designing experiences for next gen devices and technologies. A team of designers with different backgrounds come together to ideate, execute and take it to a level where it can pitched to the VP of India as well as HQ ( Korea)

Samsung IP team works in continous sink with the design & development team. Every innovative idea pitch is seen as an patent opportunity and filed supported with patent document

InvestRica simplifies the investment experience for those who shy away from the complexity of investing. Its takes 3 simple steps to automated investments.

Commercus is a multilingual advertisement web portal to buy and sell. The user can post an ad in their own language and select the languages to be translated into.

B- Bonked is a self initiated thesis project on pervasive gaming. It is an interactive wearable gamer jacket + app, revisiting the local street games of India with the new age of technology. 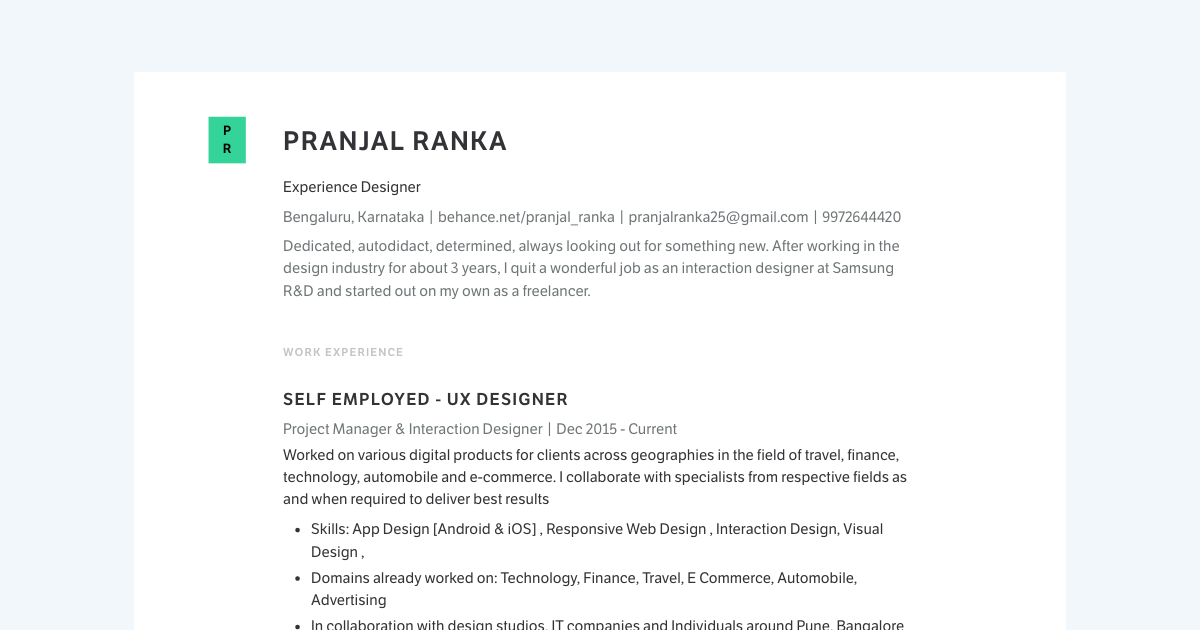